New things - a look back

While searching the Odebolt Newspaper Archive and other area newspapers I've run across some interesting articles chronicling the excitement of new things happening around town. Hope you enjoy this look back in time!

In 1883, the Denison Review had an article about the "largest and most elaborate farm barn in Iowa" on the Cook Ranch. 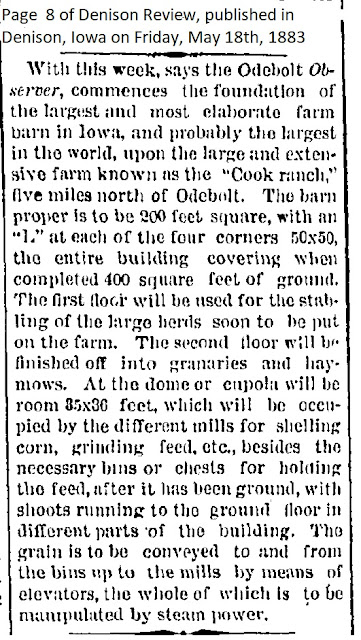 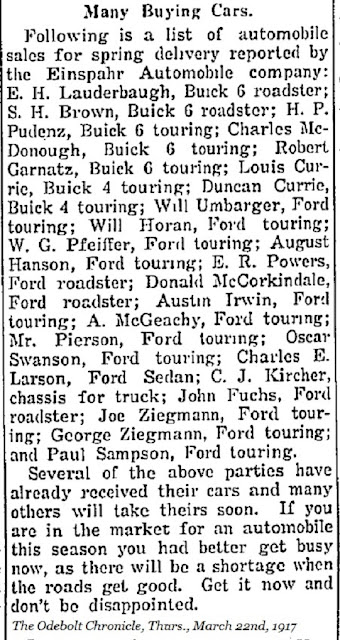 The July 28, 1949 Odebolt Chronicle had an article on "Another Television Set in Operation Here in Odebolt! 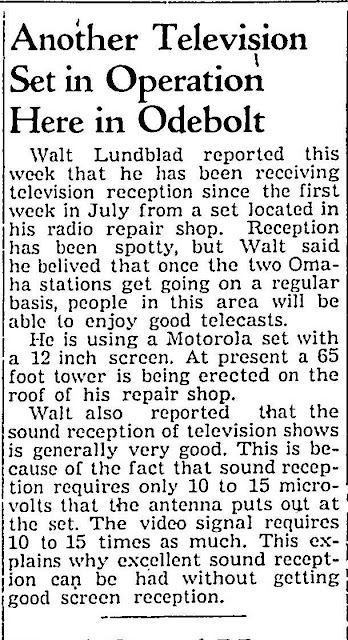 An ad in the May 30, 1946 Chronicle announced the opening of the Ida Grove Airport. 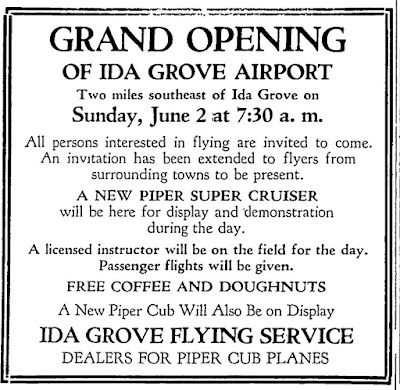 And in the next edition of The Chronicle (June 6, 1946), an article about Dennis Peterson flying a plane during the opening. 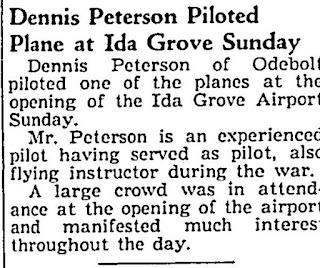 Finally, the opening of the Odebolt swimming poot on August 7, 1953, was a long awaited event and many community members spent hours and hours of volunteer time to get the pool and pool house up and going. A real Odebolt milestone! And it is still operating in 2020! 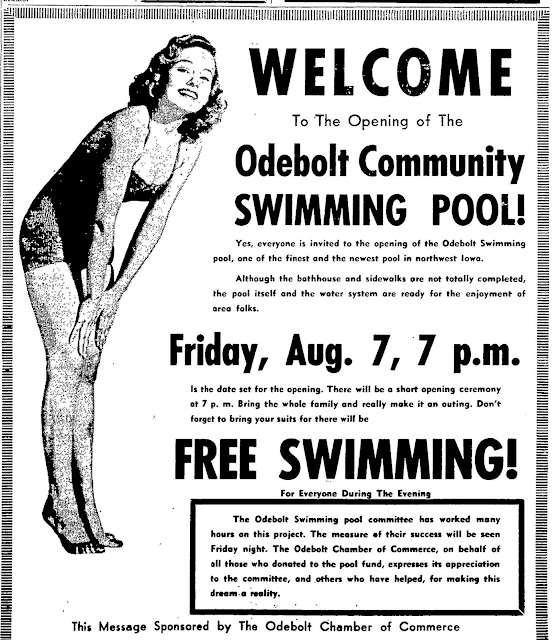 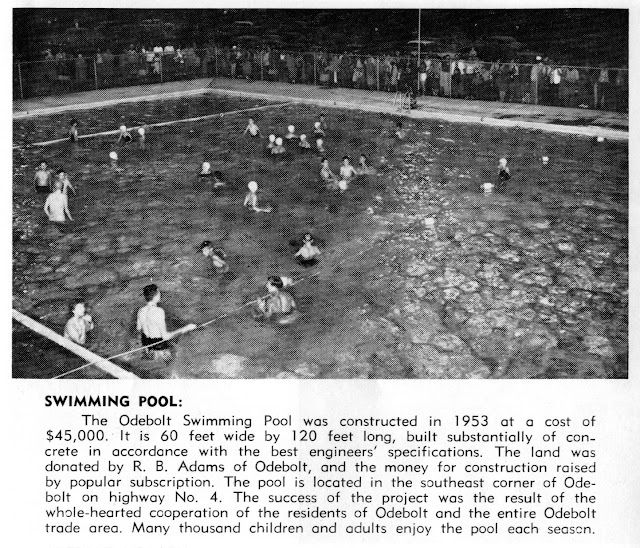 Posted by Odebolt History at 7:20 PM No comments:

Photo believed to be either late 1940s or early 1950s. Please help identify these men!

Posted by Odebolt History at 7:06 PM No comments:

CANCELLED for 2020
Creek Days  and Odebolt-Arthur All School Reunion
If you want a reunion mailing, update your mailing & email addresses at oaalumniassn@gmail.com
Facebook Page
1918 Influeza in Odebolt

I thought I'd do a bit of research in the Odebolt Newspaper Archive about the 1918 Influenza Outbreak and how it affected Odebolt. There follows a few articles to show how people fared during that time.

Keep in mind that at that time, there were no vaccines for measles, mumps, scarlet fever and the like. When someone in a family contracted a highly communicable disease, the household was quarantined until all were well, so there are many notices of various families being quarantined, or coming out of quarantine.

However, the quarantine during the 1918 Influenza was different. All meetings, churches and schools were affected. And you couldn't go to the pool hall or the Princess Theater. There are also many articles about our local servicemen who were quarantined at their military camps.

Why Deliveries Are Slow.
The post office influenza quarantine has greatly stimulated letter writing. Almost fifty percent more letters were received the last week than ordinarily. This makes mail deliveries slower, especially since two of the office force, Mr. Ballard and Mr Hansen - have been absent from their duties owing to sickness.

Closing Effects Newspaper
For the first time since the social column was established in The Chronicle, this week's issue has no social activities. The closing of all public meetings prohibits the holding off all social events. The absence of the social news together with the church notes and school notes is noticeable. It is hoped that the quarantine will not be needed many weeks.

Quarantine Lifted - Quarantine regulations, which were ordered to prohibit all public meetings and gatherings, owing to the prevalence of influenza, have been lifted. The billiard rooms opened Monday and the Princess (theater) last night. All public church services will be resumed on Sunday, unless there should be a change in the orders.

[Another article on the page]
Will a. McCorkindale of Camp Gordon has been promoted to First Sergeant. He has not been at non-com school, but has made good in his work in the ranks. He was first corporal, then sergeant, and now first sergeant. He writes that the quarantine was lifted there for the flu, but is on again for measles and mumps. He has not had the flu.

Notice: The quarantine for the Spanish influenza will be lifted in Odebolt Saturday morning, November 16. - Board of Health

[On the same page] Strict quarantine is on again at Lake View. Public meetings are not to be held nor theaters or pool halls opened. Not more than three persons are to be allowed at one time in the stores or post office. There has been two deaths there in the last week.

Mrs. E.R. Powers Dies Monday;
Her Death Marks the History of One of the Saddest Occurrences in Odebolt History.

Never to our knowledge has as sad an occurrence taken place in Odebolt, as has come in the past week, when a family - husband and wife and a new born babe - have all fallen victims to the dread malady that has been sweeping the country for the past few months.

A shock went over the community on Monday morning, November 11, when in the midst of the general rejoining over the news that the war had ended, the word went out that Mrs. Barbara Powers was dead.

Only a few days previous - Wednesday morning, November 6 - her husband Edward R. Powers had passed away, and in such a short time, the young wife had followed.

Mrs. Powers was taken sick with influenza about thirty-six hours after her husband came home sick with the disease, and she had cared for him as long as she was able. She battled valiantly for life, bearing up remarkably well, when she knew her husband had passed to the other world, and until Monday morning hopes were entertained for her recovery.

Sunday night a baby daughter was born to her, but was dead at birth, and the knowledge that she had lost her babe as well as her husband seemed to take away her courage and she had no heart to fight longer for life. She passed away a few minutes after eleven o'clock.

Funeral services were held at 10:30 o'clock yesterday morning at the cemetery, where a large company of friends had gathered to pay their last tribute of respect to one who had gained the love of all who knew her. Rev. Father Schaefer had charge of the service and Will J. McCorkindale, Charles Davenport, Albert Landgraf, Alphons Schmitz and Vincent Ballard acted as pall bearers.

Anna Barbara Alexia Mattes was born in Odebolt April 15, 1892, daughter of Mr. and Mrs. J.R. Mattes, and her life has been passed here. She was graduated from the local schools with the class of 1909, and attended the university of Illinois, after which she remained at home until her marriage.

On April 23, 1914 she was united in marriage with Edward R. Powers, and after a brief residence in Fort Dodge, she spent the most of her time with her mother, except for the time she spent at the cottage at Lakewood. Her mother died nearly two years ago and since that time she has kept the home for her father.

Barbara was of an especially bright and happy disposition; always pleasant and wonderfully kind hearted; she was liked by everyone. Her death brings sorrow, not only to the family but to many others as well.

Her father, J.R. Mattes, and her brother, Frank, are all who are left of a large family, and they surely have the sympathy of the community. Frank is at an officers training school at Camp Grant and arrived yesterday morning only in time for the funeral.

Other relatives here for the funeral from out of town were E. P. Hartman and son Philip and daughter Mary and Mrs. Joseph Hartman of Lake View, E.W. Powers and daughter Louise and sons Mark and Burton and Mrs.Paul Powers of Lohrville.

[On the same page]
Mrs. O.E. Huglin is scheduled as hostess for the members of the Tuesday club Tuesday afternoon, November 19, and the meeting will be held if the quarantine remains lifted. The roil call at this meeting will be answered with war poems.

(Apparently the quarantine was off and on for a while. The final notice below states that the quarantine is lifted as of December 24, 1918, just in time for Christmas!) 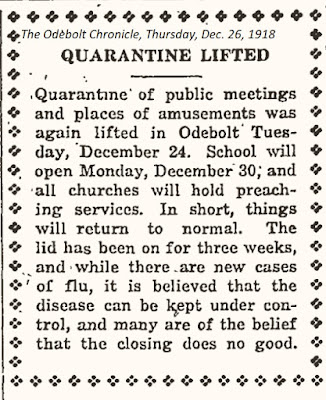 Posted by Odebolt History at 7:46 PM No comments:

The Odebolt-Arthur All School Reunion
and 2020 Odebolt Creek Days
HAVe BEEN CANCELLED
We hope to have it next year (2021) instead.
Please send your updated address information to oaalumniassn@gmail.com
Posted by Odebolt History at 5:17 PM No comments:

Topics in this blog